Forests are nature’s best solution for removing carbon from the atmosphere, but they are at grave risk. In 2012 the UN declared the 21st of March the International Day of Forests to raise awareness and highlight the importance of all types of forests. The theme for this year is Forest Restoration: a path to recovery and wellbeing.

Trees make our life on earth possible and contribute to our mental and physical wellbeing so it’s only right we celebrate them. Take the time this year to recognise how amazing our trees and forests are – walk in a forest, take your camera or your sketchpad, you could even plant your own tree. Scroll on for some arboreal inspiration…

Image by Casey Horner on Unsplash

Image by Rebecca Campbell on Unsplash

Southwest of Manchester and with its own train station Delamere Forest has been designated a site of special scientific interest (SSSI) due to its colony of great crested newts and rare types of moss. There are plenty of ways to enjoy the forest from gentle hiking trails to biking trails to tree top adventures. Deep in the forest you’ll find the ancient Blakemere Moss, a swampy area which features two hollows dating back to the Ice Age and surrounded by towering oaks.

For International Day of Forests you could follow a guided tour of Delamere or learn some bushcraft skills. Check the website for ways to get involved. 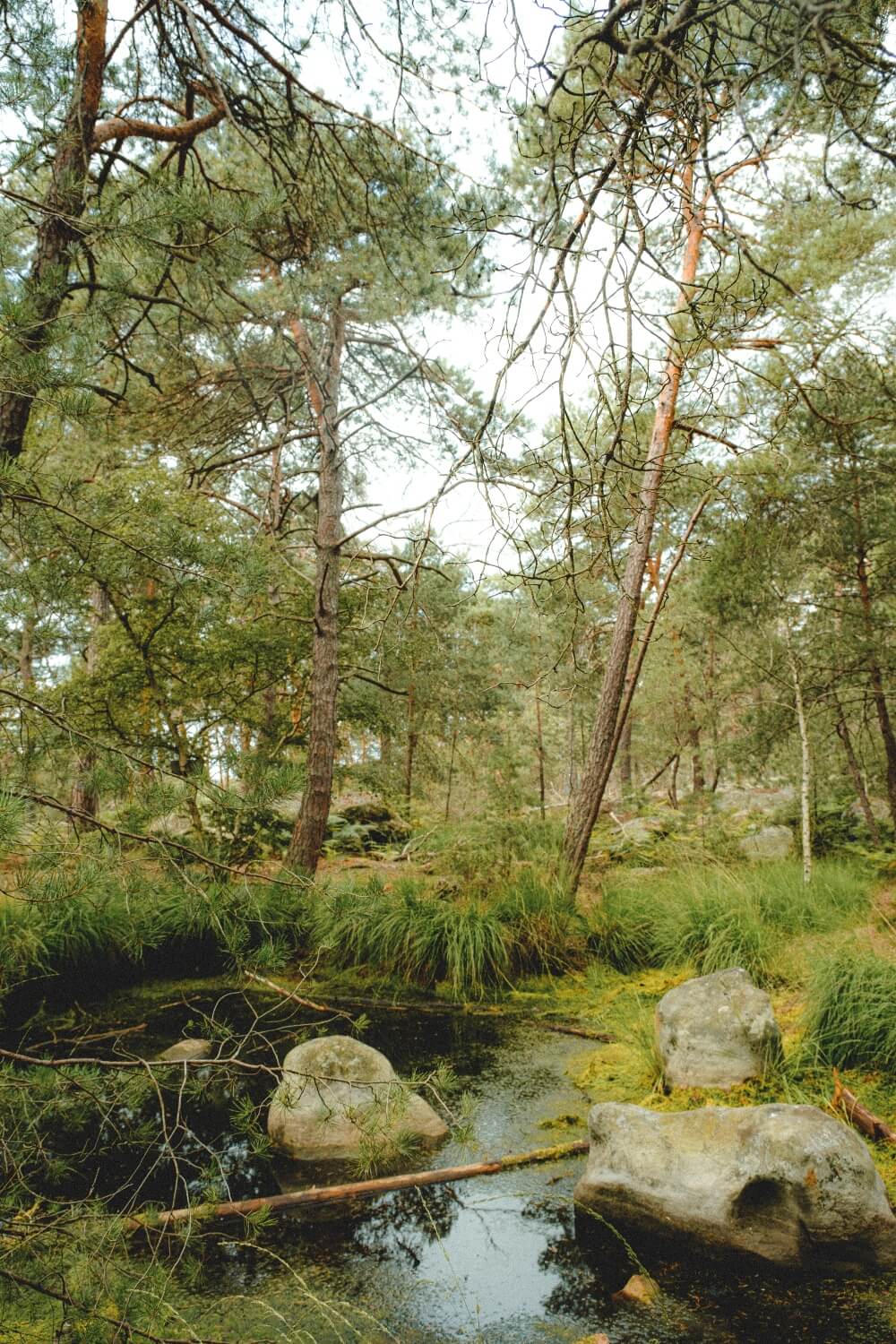 Image by Mathias Reding on Unsplash

Under the pressures of deforestation and climate change, forests across the planet are shrinking but France is bucking that trend. More than 30% of the country is covered in forests and last year the French government announced that they plan to enlist the help of schools to plant 50 million trees to repopulate its woodlands.

Fontainebleau, an easy day trip to make from Paris is our favourite. A deciduous forest, it’s one of the largest in the country and brims with biodiversity. Home to over 7000 species of animals, it’s great for birdwatching and walking and is also known for its unusual rock formations. Aside from the Forest, the village of Fontainbleau is a foodie heaven with top notch patisseries, fromageries and restaurants. Plus, a visit to the royal castle to see Marie Antoinette’s boudoir and Napoleon III’s theatre is not to be missed. 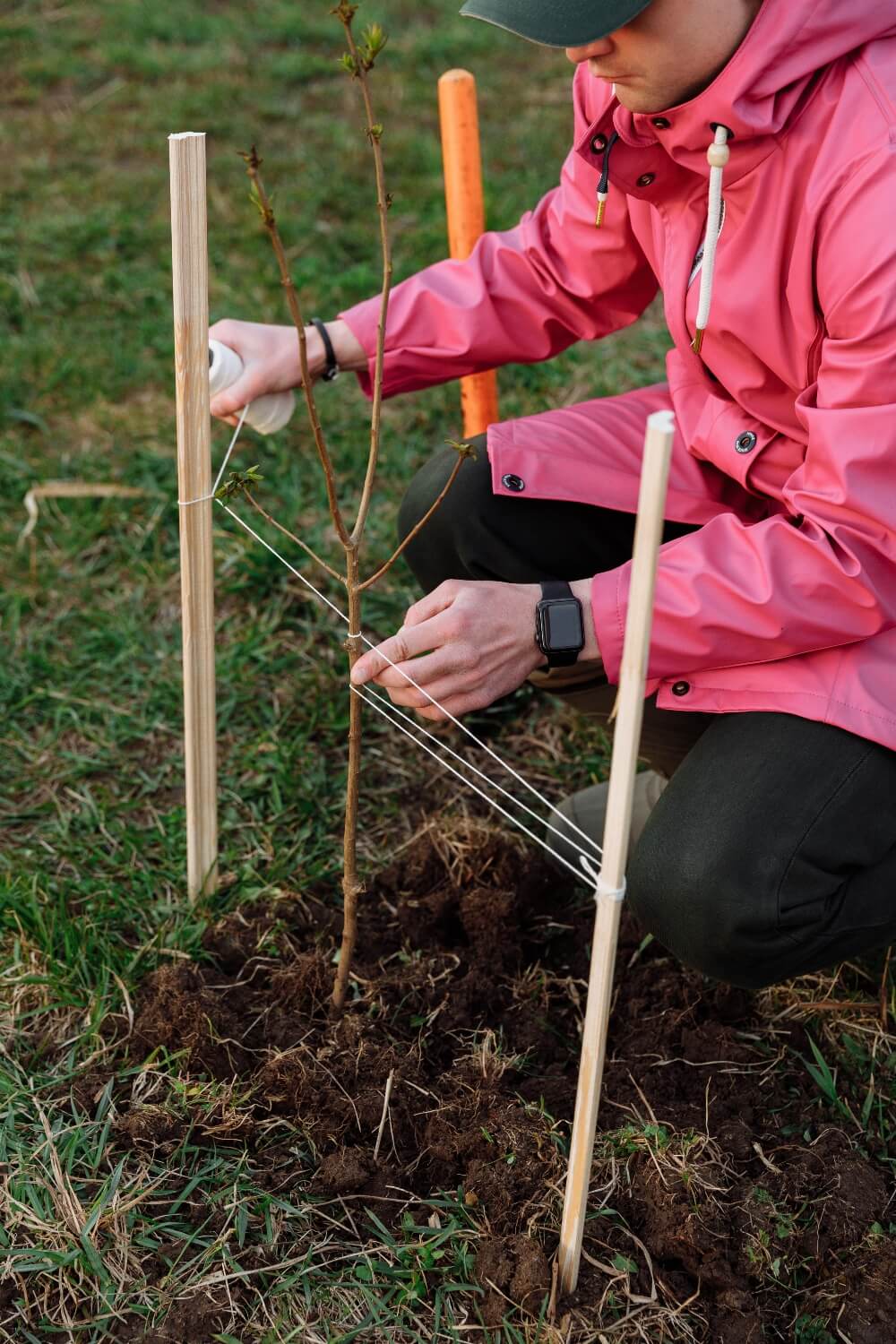 Image by Thirdman on Pexels

The Woodland Trust cares for thousands of woods and forests throughout the UK. Located close to Derby and Nottingham on the southern edge of Heanor and Smalley, this forest is currently in the making! As part of the Climate Fightback Campaign the Woodland Trust is planting over 250,000 trees on this site. Once complete it will be a thriving new woodland scattered with biodiverse ponds, open spaces and trees for everyone to enjoy. Children and young people, especially those aged between 10 and 20, will help shape the future of this amazing place. If you want to get involved and help plant those trees you can find out more here. 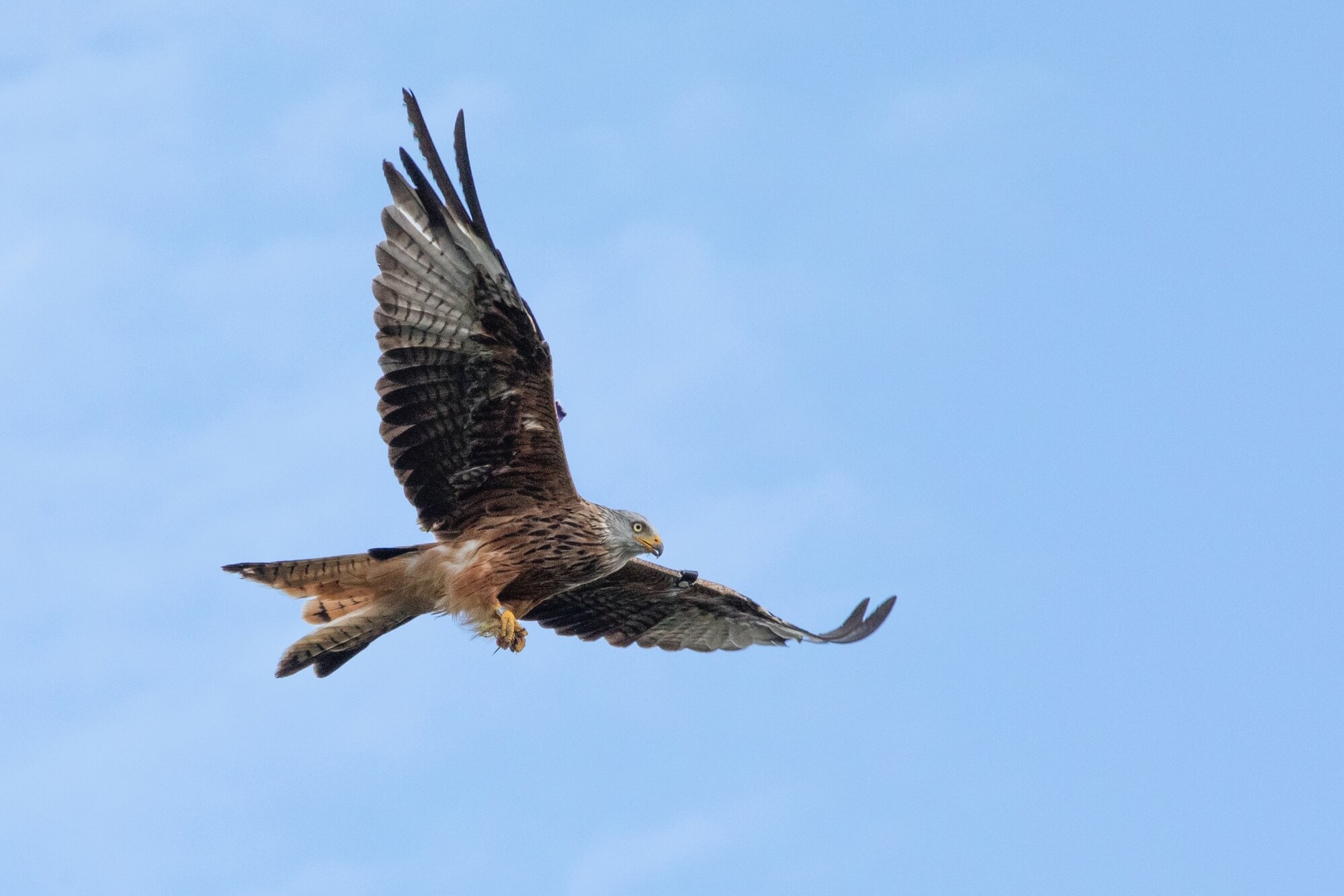 Image by David Adams on Unsplash

Hats off to the Welsh government who, over the next year, are providing every Welsh household with a free tree to plant as part of the fight against the climate emergency. Wales is a country blessed with many beautiful forests, the Nant yr Arian Forest near Aberystwyth in Ceredigion being one of them. Shaped like a horseshoe and curving round a deep valley, this forest offers fantastic views to the sea. From the visitor centres you can choose from scenic walking trails or single-track mountain bike routes. Remnants of the lead mining industry are still visible along the trails but today bilberry and heather cover the hills whilst majestic red kites circle above. The Forest has a long-established tradition of feeding the red kites every day which began in 1999 as part of a programme to protect the small number of these birds in the area.

Nant yr Arian forms part of the National Forest for Wales who look after the existing woodland and also create new areas of woodland. The aim is to develop a connected network throughout Wales that will bring all sorts of social and economic benefits. Check their website to find out more.

The Urdaibai Estuary is a natural area formed at the mouth of the river Oca. One of the most richly diverse natural landscapes in Spain, it was declared a world Biosphere Reserve by UNESCO in 1984. One of the most important ecosystems here is the Cantabrian holm oak forests which are home to a huge number of birds. In the summer of 2021, the area became famous internationally via its osprey webcam project run by the Urdaibai Bird Centre when it was noted that of the three eggs layed the first chick to hatch was an albino, totally white and with red eyes. The first ever recorded.

The global charity One Tree Planted are carrying out reforestation work here to rebuild the forests of Undabaso. You can get involved by either donating (every dollar plants one tree) or becoming a tree ambassador and leading your own local tree planting initiative. 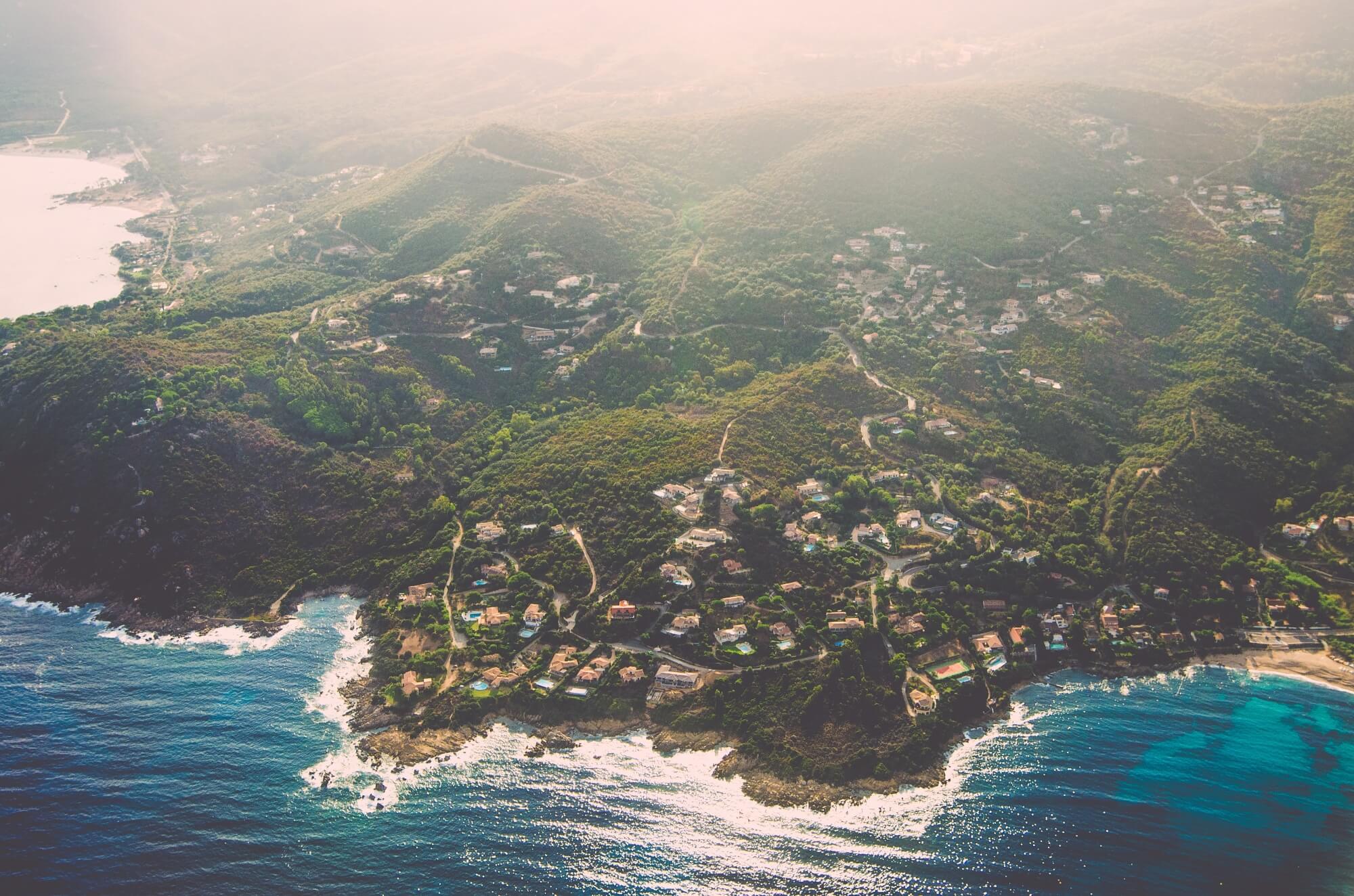 Image by Ference Horvath on Unsplash

Way back in 1584, the then governor of Corsica decreed that every farmer must plant four trees a year; a chestnut, a fig, an olive and a mulberry and that long sighted decision was to transform the economy of the island, not to mention it’s appearance - the region is renowned for its greenery. The laricio species of pine tree is the emblem of Corsica and the Vizzavona Forest is full of them. From its perch of 1163m above sea level, the views are spectacular. For hiking, tree climbing or just relaxing this forest is an experience not to be missed.

Image by Pratik Agrawal on Unsplash

In Germany there are some incredibly beautiful forests, but the Spreewald is probably the most unusual. An alder and pine forest, it became a designated UNESCO biosphere reserve in 1991. What makes it unique are its wetlands and irrigation system of over 200 small canals. These waterways were formed during the ice-age but can be explored today on a put or rowboat.

The non-profit organisation, Green Forest Fund focuses specifically on Germany and uses donations to buy plots of land to grow forests on. It’s founder, Thorsten Walter, says ‘Climate change is the great challenge facing humans in this century’ and he believes that everyone can play their part in responding to it.

Other ways to celebrate International Day of the Forest

Trees for Jane is an international campaign to protect and restore the world’s trees and forests, inspired by Dr Jane Goodall, the renowned primatologist and United Nations messenger of Peace. Check out their website and find out how you can get involved.

For budding photographers and conservationists - The Earth.Org Global Wildlife & Natural World Photography Competition is now open for submissions (closes April 29th) and as the saying goes ‘a picture is worth a thousand words.’ This non-profit environmental organisation is focused on what’s happening to natural ecosystems worldwide and believes that photography and imagery have the power to inspire, educate and galvanise action. You can see the winners from last year’s competition here.

Earth tones for International Day of the Forest